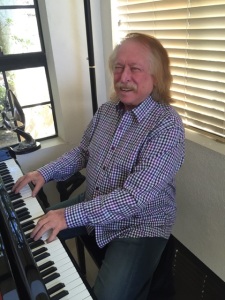 Don Randi is the talented composer, arranger, music director and keyboard musician who was a member of the legendary “Wrecking Crew” group of studio musicians that recorded hundreds of top ten hit records from the early 1960s through the 1970s. Don talents and accomplishments also include club owner for over forty years of The Baked Potato jazz club in LA and releasing twenty jazz albums of his own including the 1980 Grammy nominated album “New Baby” and his 2013 CD release, “Acoustimania.”

Karen “Nish” Nishimura is an independent writer and branded entertainment producer, leading production of successful digital advertising campaigns and promotions. Nish produced projects for Disney Online, Sony Pictures Entertainment, Mattel and CBS. A music lover passionate about jazz, Nish met Don Randi years ago at his club The Baked Potato. Having heard Don tell amazing stories about his life during his shows, she eagerly accepted Don’s invitation to become his biographer. “You’ve Heard These Hands” is Nish’s first published book. For articles and other published work from Nish, check out her blog:  http://nishsniche.com/ and Chatmosa